The History of Lechon in Cebu

Cebu is famous for many reasons. It’s home to the annual Sinulog Festival, which is known as the single grandest local festival in the Philippines. But perhaps the most compelling reason to visit Cebu is the fact that it’s also known in some circles as the city where you can get the best lechon in the Philippines. For the unfortunate few who haven’t heard of lechon yet, it’s a local culinary tradition where a whole pig is stuffed with a fragrant mix of local herbs at the belly and then slow-roasted over hot coals to perfection. When it’s cooked to perfection, lechon is the most tender, crispy, and juicy savory delight that you’ll ever taste in your life.

Understandably, it’s one of the first things that comes to mind for most Filipinos at the mention of Cebu. Not many are aware of the fact that the roots of this classic dish goes way back to the 1920s. The first ever lechoneros of Cebu came from Talisay City. They specialized in a delicious pork dish called inasal, the root word of which is “asal” which is basically the Cebuano term for “cooking over live coal,” according to historian Louella Alix. That’s why “inasal” refers to anything that Cebuanos like to grill, like chicken or manok inasal, another famous Cebuano dish. And the mother of all inasal dishes? None other than a slow-roasted, herb-stuffed whole pig, also known as lechon. 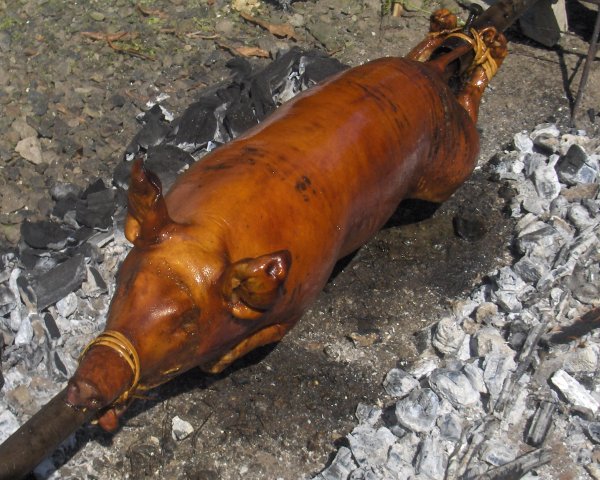 Many families lay claim to the roots of this tender, juicy, and crispy legacy. Ruthy’s Lechon says that their matriarch Mila Candeja Garces was the one who brought the original Talisay lechon recipe to Cebu. Meanwhile, Johnna’s Liempo Haus in Balamban lays claim to being the first lechoneros to offer just the lechon belly in the 1930s. In other words, they were the first to figure out that the belly is the most delicious part of the lechon. Apart from being where the fat is concentrated, it’s also where Cebuanos stuff the herbs before the slow-roasting begins. The stuffing is usually a combination of lemon grass, spring onions, bay leaves, garlic, salt and pepper – nearly every family has their recipe using the same ingredients. No wonder Choose Philippines calls it the Lechon Capital of the World.

Today, the many lechoneros and restaurants in Cebu serve a variety of lechon dishes, including lechon paksiw, humba lechon, and even “pritchon” – lechon that’s fried after it’s been slow-roasted for a couple hours. If you want to sample authentic Cebuano lechon, it’s easy enough to get to Cebu when you’re coming from Metro Manila. In fact,  Cebu is one of the flagship destinations that Philippines Airlines flies to multiple times every day. It’s the easiest way for foreign travelers to get there from Manila via a one-hour flight. Yes, it’s that easy!

When you’re done stuffing yourself silly, consider hiking to Cebu’s Osmena Peak. Here on Love Eat Wander, we can tell you that the climb to Osmena Peak, Cebu’s highest point, is a difficult trek that’s well worth every step even if just for the view. There’s nothing like its crisp mountain air and breathtaking views of Cebu after a good serving of local lechon.

Thank you for dropping by!

Do you have a favorite restaurant that you wanna be featured in our blog? Send us a message!

Thank you for dropping by! Should you want to add/dispute something in this article, please leave a comment below. We would love to hear from you! Let’s get connected in INSTAGRAM & TWITTER! You can also join our community page Love. Eat. Wander.

This site uses Akismet to reduce spam. Learn how your comment data is processed.

WHAT ARE YOU LOOKING FOR?